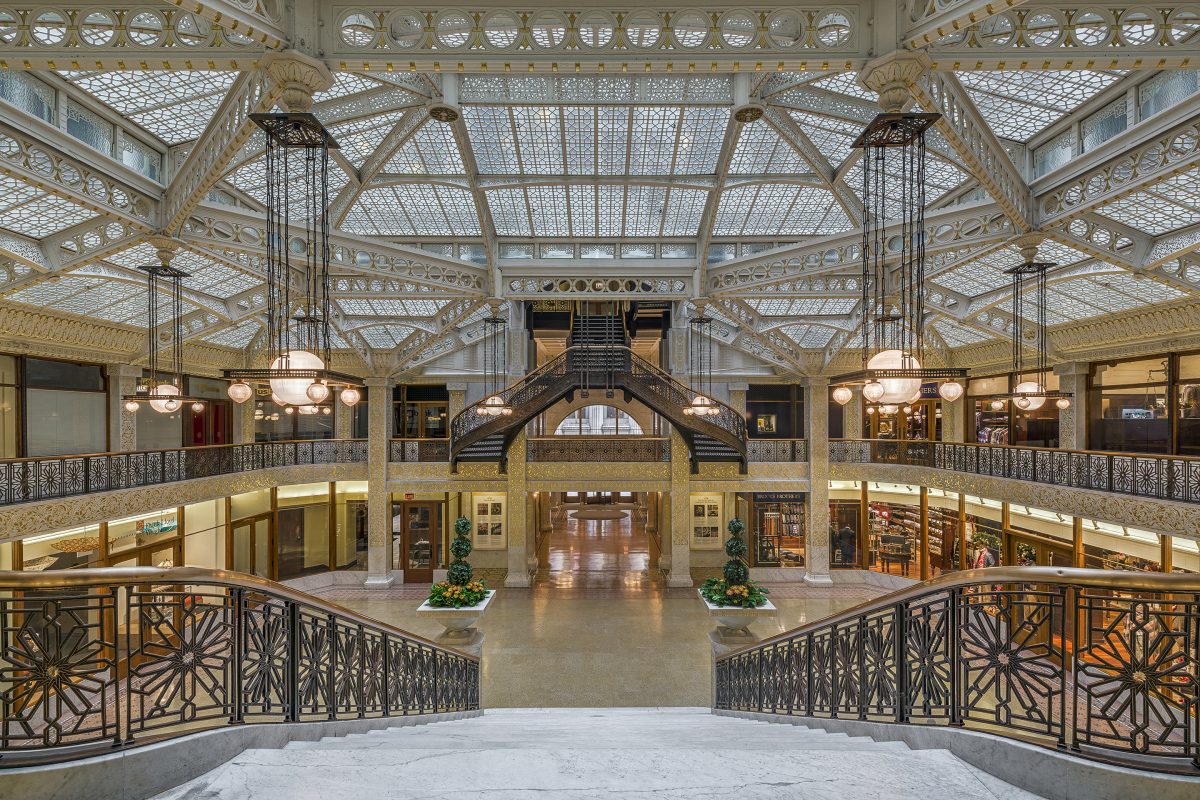 Today, architects across the globe push the boundaries of materials and technology in order to design taller and taller buildings. Supertall structures, like the Burj Khalifa tower (Dubai, 2008) designed by the Chicago firm of SOM Architects, reach thousands of feet into the sky. The origins of these incredible buildings began in America at the end of the nineteenth century. At this time the city of Chicago was at the forefront of tall building design.

After the Great Chicago Fire of 1871, Chicago architects began to explore new construction methods and materials to build compact, tall buildings in the city’s business district, the Loop. Inventions such as the Otis safety elevator, first exhibited at the 1854 New York World’s Fair, ferried visitors upwards to new heights, while manufacturing advances allowed for the mass production of affordable steel for construction.

The Rookery building, built in 1888 by the Chicago firm of Burnham and Root, is one of Chicago’s most important early tall office buildings. Daniel H. Burnham (1846-1912) and John Wellborn Root (1850-1891) formed their partnership in 1873. By the time they received the commission for The Rookery, in 1885, the firm had already established a reputation in tall office buildings. Built on the site of Chicago’s old City Hall, the Rookery’s unusual name came in part from the birds that used to nest at the old site.

At eleven stories tall, the Rookery was the tallest building in the world at the time of its completion. John Root used a combination of heavy stone walls and a metal structural frame to reach this height. To support the weight of such a massive structure on Chicago’s soft clay soil, Root created a “floating foundation,” a network of iron rails and metal beams encased in concrete. In addition to these innovative methods of construction, the building used many other modern features including, passenger elevators, fireproof construction, and electric lighting.

To bring as much natural light as possible to the offices, the building is designed as a hollow square (think of a square doughnut). Offices are arranged to either face the street, or face inward to a central light well, open to the sky. At the heart of the building, was the light court, a beautiful, light-filled public space. Sunlight from the opening, eleven stories above, illuminated the light court, which Root decorated with elaborate ornamental ironwork. In his design of the building, Root blended past and future, combining modern construction techniques with interior and exterior ornament inspired by ancient Romanesque, Islamic, and Venetian designs.

In 1905, Edward C. Waller, the Rookery building manager, hired Frank Lloyd Wright to renovate the light court and entrance lobbies. Wright knew the building well, having rented office space at the Rookery from 1898 to 1899. In his renovation, Wright removed Root’s ironwork, replacing it with white marble, carved and gilded with ornament. The designs Wright used harmonize with Root’s exterior ornament for the building. Wright’s renovation transformed the light court into a gleaming white and gold space that would impress clients arriving for business at the Rookery and inspire the staff who worked in the building.

In 1931, The Rookery underwent an additional renovation by William Drummond, a former employee in Wright’s Oak Park Studio, and in 1992, the building was meticulously restored to its 1905 appearance. The Rookery survives today as an important part of Chicago’s rich history of innovation in architecture and design.