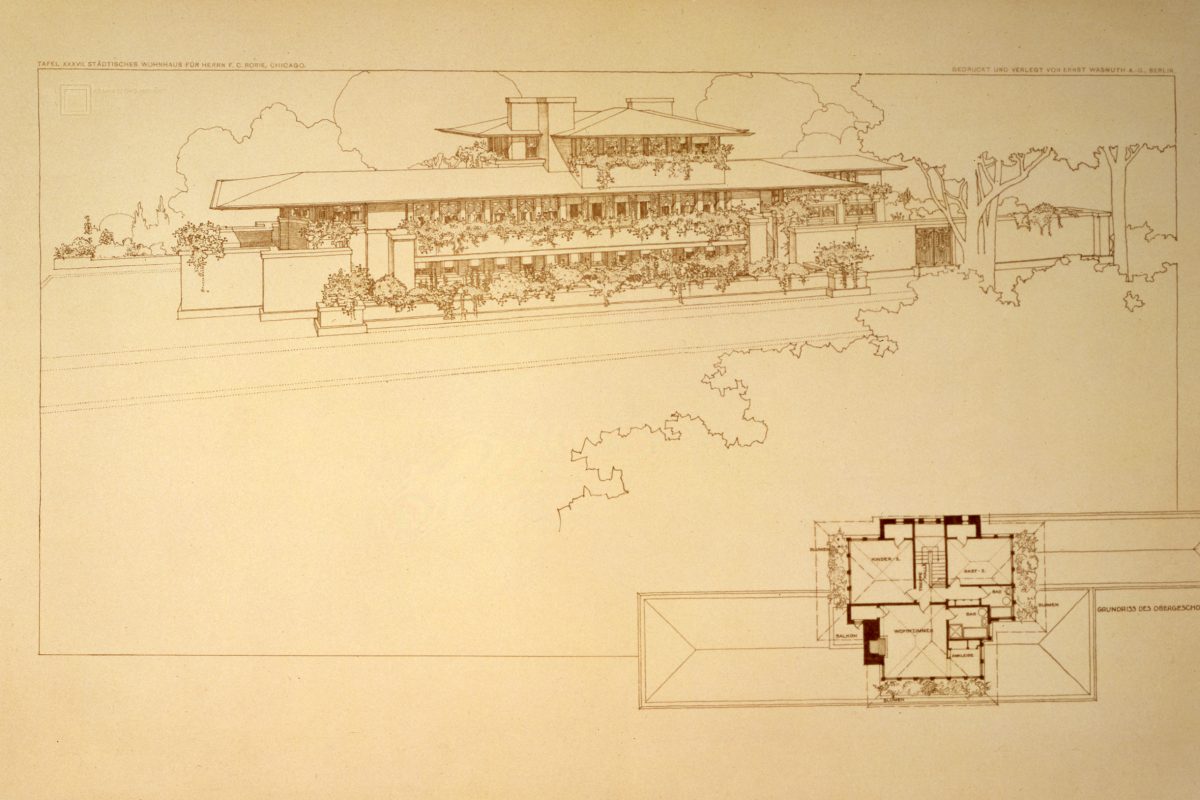 In 1887, when Frank Lloyd Wright began his career as architect, American architecture was heavily inspired by European styles. Houses were often busy and cluttered, their exteriors defined by traditional features such as towers, spires, and columns. Their interiors were divided into box-like rooms each assigned a specific function; the dining room, the parlor, the music room. In place of these houses, Wright created a new, American architecture inspired by the Midwest landscape that became known as the Prairie style. Wright believed that designing his houses in harmony with nature would improve the health and well-being of the families that lived within.

A Prairie house features bold, horizontal lines that echo the flat prairie landscape. Low, hipped roofs extend out beyond the walls, creating a sense of shelter and protection. Balconies and terraces line the exterior and are filled with plants and shrubs. Wright uses simple building materials, such as brick, wood, and plaster, and a natural color palette of reds, browns, yellows, greys and greens. All of these elements help create a sense of balance and harmony and connect the building to the land upon which it is stands.

Wright’s solution to the confined, box-like interiors of traditional houses was the open floor plan. On the interior, Wright’s Prairie buildings are designed with open spacious living areas suited to the modern American lifestyle. Wright used furniture, wooden screens, and changes in ceiling height to break up the spaces into areas of use. At the heart of the home, Wright often built a large fireplace around which the family could gather.

Wright lined the rooms with art glass windows and doors, creating bright interiors lit with natural light. Wright called his windows, “Light Screens” because they broke down the barriers between the interior of the house and the world of nature outside. The windows feature geometric patterns in glass inspired by nature. Many of the designs are based on actual plants that grew on the Midwest prairie.

Wright designed every part of the building, including furniture, rugs, and light fixtures. By doing so, he was able to ensure everything worked together in harmony. Wright’s Prairie-style furniture was typically made of oak, to match the woodwork on the interior of his houses. It was simple, and geometric, without elaborate carvings or ornament, just like the house itself. Wright also designed murals, sculptures and decorative urns and vases, to ensure his buildings were filled with beauty and inspiration.

Frank Lloyd Wright’s creation of the Prairie House, with its open and flexible living spaces would shape the way Americans lived in and used their homes in the twentieth century, and still influences house design today.