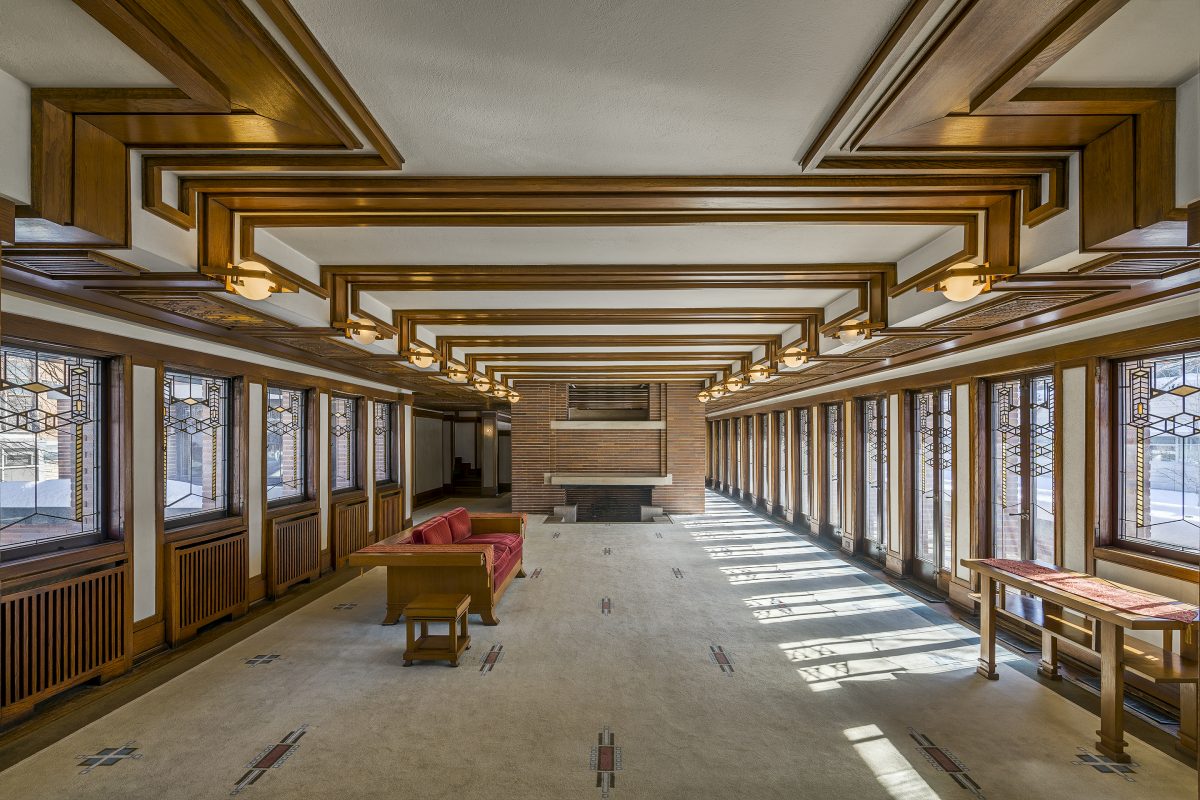 Designed from 1908 – 1910, Frank Lloyd Wright’s Robie House is the most famous of the architect’s Prairie-style houses. Wright’s clients, Frederick Robie and his wife Lora, lived in Hyde Park on Chicago’s South Side, near the University of Chicago. Lora Robie was a graduate of the University, while Frederick was an assistant manager of his father’s Excelsior Supply Company, a manufacturer of bicycle parts. In 1908, the Robies commissioned Wright to design a new, modern house for their young family.

While Wright’s Prairie houses are typically horizontal like the Midwest landscape, the Robie House site helped Wright determine the design of the building. The long, narrow corner lot is three times as long as it is wide. Wright created a floor plan of two long rectangles that fit within the narrow dimensions of the lot. He increased the horizontal sweep of the house by using cantilevered roofs that extend beyond the walls at each end. A cantilever is a projecting horizontal structure anchored at only one end, like a diving board. Every element of the design is carefully considered, Wright even uses long, narrow Roman bricks that further emphasize the horizontality of the house.

In his architecture, Wright always worked to create a strong connection between a building and the world of nature. Wright believed that designing his houses in harmony with nature would improve the health and well-being of the families that lived within. While the Robie House is built on a narrow lot without space for a large garden, Wright designed balconies and terraces at every level which he filled with flowers and shrubs. He created a sense of harmony with nature through his use of colors and materials. The color of the bricks, limestone, plaster, clay roof tiles, and copper gutters all work together to suggest the landscape of the prairie.

The entrance to the house is found at the end of long, sheltered path, almost at the rear of the property. To find it, the visitor walks a path of discovery, experiencing the building from different viewpoints, and gaining a better understanding of its design. The ground floor of the house features an entrance hall, two private rooms for the family, including a playroom for the Robie children, and a three-car garage, an innovation that highlights the growing importance of the automobile. The expansive main living area is raised above ground level, providing light, space, and privacy for the family. The kitchen and servants quarters are also on this main level, while the family bedrooms are located on the smaller third floor.

At Robie House, the main living space is a single, light-filled room divided only by a central chimney. The open plan design was revolutionary for the time, and created a modern, flexible living space for the Robie family, consisting of a dining area and a living area. Art glass doors and windows line the rooms of the Robie House, flooding the interiors with natural light. The windows feature geometric patterns that suggest plant forms, while also incorporating geometric elements found in the plan of the house.  Patterns inspired by nature and geometry are also incorporated into the house in the rugs and light fixtures that Wright designed specifically for the building.

Due to financial issues, the Robies sold their house after living in it only for one year. Over the course of its history, the house has had many uses. In addition to being a home, it has been used as office space and as a dormitory for students. The building was almost demolished twice, once in 1941 and again in 1957. Frank Lloyd Wright campaigned each time to save the house.  The campaign to save the Robie House from demolition helped spark a national interest in historic preservation. The building became both a Chicago Historic Landmark, and National Landmark. Today the Robie house is one of America’s most important buildings, recognized throughout the world as an icon of modern architecture and design.